Free pancakes. When you’re an adult, free pancakes is something you can probably skip. If they are giving away anything, it usually isn’t very good, and pancakes are no exception. People typically get a couple of hot cakes, and the choice of either two strips of bacon or some sausage links. Free pancakes is usually some sort of ploy to try and sell you something, with a business card stapled to the bottom of your plate. Someone high up in the company figures that with some pancake batter and a table set up in front of their shop they can convince you to buy a new furnace. It’s not a terrible marketing ploy, but it’s hard to choke down lousy pancakes while someone rants to you about how much heat this particular model spits out. Not when you’re a kid though.

When you’re a kid, damn, free pancakes! They’re free! You’re telling me someone is giving away free pancakes, and sausages? Are they some sort of millionaire? You bet I want free pancakes! Oh man, I can put as much syrup as I want on these pancakes? Yeah, I’ll take ALL the syrup! All of it. Put all the syrup on the pancakes. I get bacon too? Get out of town. I’m calling baloney. For real though? AND sausages? Today is the greatest day in my life. 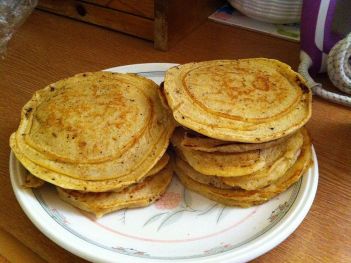 It was not hard to please 9-year Mr. Charlton.¹

And that’s the first Canada day that I can remember. There was free pancakes at Kinsmen park, which was often referred to Stoners Park, because that’s were a lot of teenagers hung out. It was Canada’s 125th birthday, and I think that’s part of the reason it stuck out in my brain. They were serving pancakes, and I remember Larry was there. He was a friend of my father’s, and he would eventually become a friend of mine when I got older. That was the first Canada I remember. I can barely remember who the first prime minister was, I struggle to piece together memories of social studies in regards to the creation of this great nation, but for some reason, that pancake breakfast is burned into my brain.

See, even though I love this country and honestly would never want to live anywhere else, I still have some trouble identifying as a Canadian. Whereas  my friends and family seem to latch on to being Canadian and celebrate Canada day, I tend to struggle and try to spend most of Canada inside. The reason is there isn’t anything I particularly enjoy that is part of  Canadian culture.

Right off the bat, I don’t watch hockey, or any sport really for that matter. I couldn’t tell you who won the Stanley cup this year (I think it was Pittsburg?) and I have more fingers than the amount of hockey games I’ve sat down and watched. With so much of Canadian identity being wrapped up in a game I have no interest in, it’s hard to relate with other people about it. Let me be a little more clear…. Ahem…

Hockey sucks. I’d rather slam my hands repeatedly in a car door than watch grown ass men skate around a rink like they were doing something important.

Did I mention I’m kind of an jerk? Yeah, that’s the other part of Canadiana I don’t particularly subscribe to. In fact, I have been given the title of honorary French person by someone who is actually from France. If you happen to think I’m a nice person, then I’ve been shielding you from the bulk of my personality. To clarify, I’m not a bad person. I don’t kick puppies or steal children’s candy, but damnit if it doesn’t drive me a little nuts to have everyone be so nice all the time. If a meal sucks, then you have every right to talk about how shitty your meal is.

Speaking of meals, what exactly about Canadian food do we have to get excited over? I’m not saying there isn’t some tasty restaurants whipping up some tasty things, but there isn’t anything specifically Canadian about them. You know what our national dishes are? Poutine and Kraft dinner. One of them is French fries covered in cheese curds and gravy, and the other is macaroni from a box. That’s our culinary contributions to the world. A side dish from Quebec and the misappropriation of Canadian identity to a box of disappointment.

Speaking about a misappropriation of Canadian identity, how about Tim Hortons? A big ol’ cup of Timmy’s coffee to get you going in the morning? The only way I’m going to consume Tim Hortons coffee is if it’s a forced coffee enema. I honestly can’t fathom why people enjoy that swill. But Tim Horton’s loyalty in Canada is unreal and it’s absolutely weird to see people shower love to a corporation that isn’t even Canadian anymore.

This awesome image? Done by an American.²

Look, I love this country and am never going to call anywhere else home. But damnit, we’re better than having our cultural identity wrapped up in a sport, a bunch of lousy food, and being overly nice to people. Because I swear, if I’m overseas on Canada day and someone offers me a Molson Canadian, I’m going to pour that garbage into the toilet. And then I’m going to demand pancakes, because that’s just as Canadian as a beer company that was bought out by Coors.

p.s. Yeah, that post took a turn, didn’t it? I’d be less dickish if being Canadian didn’t mean being a corporate lapdog.

p.s.s. If you have some better ideas of Canadian culture, send ’em my way.