I have a confession. I can’t stand fantasy novels. Even the good ones like Lord of the Rings, or Game of Thrones, or the Malazan Book of the Fallen series. I’ve tried, I sat down and gave them the ol’ college try and honestly, because I’m a sucker for punishment, I’m going to try again. Because if you read as voraciously as I do, then there’s no excuse not to read fantasy novels.

Weird, incredibly nerdy, science fiction? I have no qualms about sitting down and reading a book about sentient tanks or space operas involving hive mind wars on distant planets. A novel about rodents that solve crimes? Sign me up. Incredibly cheesy Harlequin romance novels? I’ve read dozens. But fantasy, for whatever reason, doesn’t grab me. There’s a list of novels and series of books that I’ve gotten halfway through and simply forgotten. And there’s no series more prominent today than the famous fantasy series ‘A Song of Ice and Fire’ written by George R.R. Martin, which was turned into the wildly popular ‘A Game of Thrones’ television series put on by HBO. That show has concluded, to mostly lukewarm responses to the finale as ‘Meh’. The last two seasons tell stories that have not yet been touched upon yet by the books, and most fans seem to agree that shows writing and plot have been in decline since that moment.

And I’m going to try and explain why.

Emphasis on the word ‘try’, mind you. I’m not a particular fan of the series, even the show. I thought it was pretty good, but it wasn’t something I was clamoring for. I could have waited for the box set, or never bothered to watch the series after season 7. I was bored by then. But, on the behest of both my wife and my best friend, both of who are not only fans of the show but the books as well, I’ve decided to break down exactly what happened and why the show seemed to go south so quickly.

1. The scope of the books was too large for television.

This is probably the biggest issue facing the series, and maybe why the next time you want to adapt a sprawling, massive book series, you might want to animate it. Rumor has it that GRRM wanted 12 to 13 seasons (or at least had enough material for that sort of length), HBO wanted 10 seasons, and the shows current writers/directors/producers DB Weiss and David Benioff (sardonically referred to on the internet as D&D) wanted 8 seasons, which is what we got.

As a reference point, Breaking Bad had 5 seasons, The Sopranos had 6, and Lost had 6. 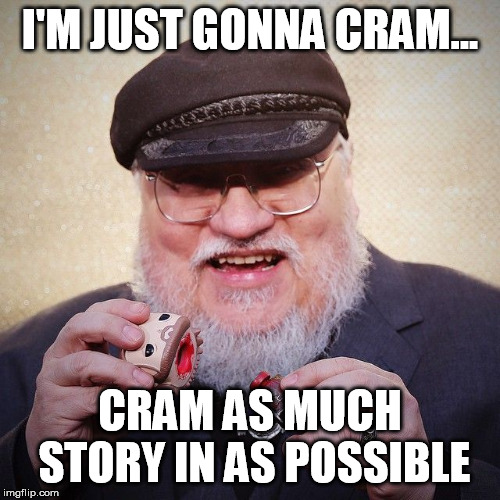 Fill it to the goddamn brim. ¹

The point I’m trying to make here is that even 8 seasons of television is a lot of goddamn television. Season 1 through 6 went so damn smoothly because GRRM had finished that part of the story. D&D were simply adapting his works for television. When the show surpassed the novels, GRRM gave the two a sense of where his vision was leading to. But DB Weiss and David Benioff had to come up everything else. Which leads me to my next point.

2. D&D wrote most of the last two seasons. They were also the show-runners.

Here’s why I’m more inclined to push the blame more towards GRRM than D&D. You see, GRRM has one job, at least that I’m aware of. He writes. That’s his only job. He’s not an architect, he’s not managing a kitchen, he’s not delivering parcels, he’s a writer. And he’s a very good writer, but that’s the only thing he’s got to do during the day.

D&D, on the other hand, they had to write the last two seasons with a tenth of the material they had in the previous six seasons. And they had a show to run. I’m not entirely sure what that entails, but if it’s like running anything, I would imagine they’d also have to worry about…

Clearly, the two of them wouldn’t be doing everything by themselves, but I assure you, that if anything goes wrong in any one of these areas, D&D are going to have to deal with it. GRRM, on the other hand…

To be honest, that’s what I would be doing with my free time if I were rich.

Fans are the best. They’re also the worst. They’ll love you when you’re at your prime, and place you on a pedestal and treat like a deity. You might even start to believe them. If you slip up, though, they will roast you alive. One and a half million people want the last season re-written. People are angry. They’ve invested a large amount of time in the series, watched it grow, fell in love with the characters. And the absolute worst thing about fans only happens if what you create is amazing; they’ll take a little piece of it and claim it as their own. You aren’t messing with Game of Thrones anymore, you’re messing with their Game of Thrones. They own stock in what the artist made, and they’ll be pissed if that stock starts to drop.

I’m not a fan of anything, but that doesn’t mean I don’t enjoy art. There’s music that has given me goosebumps. There are books that have made me a better person and filled some of the void that exists in all of us. I’ve been stunned by paintings I’ve seen in some of the art galleries I’ve been to. But at the end of the day, I truly believe that art exists in all of us, and it just takes patience and practice to get it out. Whether it’s music, or painting, or writing; your sound, your vision, your story is at your wrists and all you have to do train your hands to get it out. There’s no talent that substitutes hard work and perseverance when it comes to art. If you’re worried that your stuff is terrible, just know that there’s plenty of people out there who have awful taste, and they might lap up your garbage.

At the end of the day, it’s just a television show, it’s just a series of books, and they’ll always be more. Let George RR Martin write in peace, and let DB Weiss and David Benioff go work on Star Wars. Who knows, maybe in 20 years, they’ll do a remake like they do with everything these days. Just be thankful you got eight seasons because I’m still livid they only made one season of Firefly.

p.s. I have gotten through about half of the first book. If someone can convince me otherwise, it’s going to stay that way.

p.s.s. There are only a couple shows I really love, but a couple of them seem to cross Westerns and Space Operas (Firefly and Cowboy Bebop). Go figure.