Some of the people reading this know Mr. Charlton. They’ve got a pretty good idea of what I’m about. If you’re not in the know, then I’ll lay out a few things about me, things that everyone should know.

Now, when I say I hate camping, I mean I hate it down to my very core. It’s usually the last way I’d want spend vacation time. To give you an idea about how much I detested camping,  I’ll give you a breakdown how many times I went camping in my twenties.

That’s the only time I can remember going camping. Put it this way. It’s safe to say that the number of days I went camping for a decade and a half was probably less than seven.

There are a couple of reasons I’m not a big fan of camping. Probably the biggest reason is I’m from a small town in BC, where the community is nestled in the Rocky Mountains. It’s a beautiful place to grow up. I also hated it as a kid. I was fascinated by the city. The skyscrapers, the millions of people, the hustle, and the bustle. That’s where I wanted to be when I grew up, so the second I had the chance to move to the big city, I did. A fresh faced eighteen year old me went straight to Calgary when I had the chance. And I loved living there.

I could also mention the bugs, the smoke, the dirt, the not being able to shower every day. I hate plastic plates and cutlery. Can’t stand outhouses. People tell me “It’s not like camping when you’re a kid. You can drink now.” So what? I can drink at a bar in the city, surrounded by people instead of animals that want to eat me. Which makes it really weird that I’ve planned camping trips this summer.

You see, my girlfriend Kat loves camping. She has a camping box, with a camp stove, and a bunch of camping gear. One of her favorite stores is MEC. When we first started dating, it was one of the questions she fired in my direction right off the bat. I can actually still remember it, we were talking about the hobbies that consumed us, and she snapped her head in my direction, eyes bright and full, and she joyously asked “Do you like camping”? I remember staring off into the distance for a moment, trying the best way to phrase my displeasure in a manner that wouldn’t break her heart.

“No, I fucking hate camping”.

My response lacked tact, certainly. But when I saw her eyes droop and she quietly muttered “Ok”, I knew that if I were to spend any time with this girl, I’d have to occasionally go camping. I’d have to sit out in the cold, in rain , with mosquitos, with no showers and no martinis and no grocery stores within a walking distance. It would have to be done.

Fast forward a year, and we have yet to go camping. I decide to plan a camping trip, to the campground of my childhood, Scotch Creek provincial park on the Shuswap lake in BC. I make it a family affair and invite my brothers, my mom, aunts, uncles, and cousins. That’s camping trip is going to be happening in a couple weeks from now. But we needed to do a dry run, test out the equipment, figure what we can pack in the car. That happened last week, and here is the report.

I had a great time!

The weather was gorgeous, we went for a little hike, had a couple of fires, there weren’t any mosquitos, and our neighbors were quiet. Here’s a whole bunch of pictures I’m going to whore out, so you can live vicariously through me.

This was the second toad Kat caught. 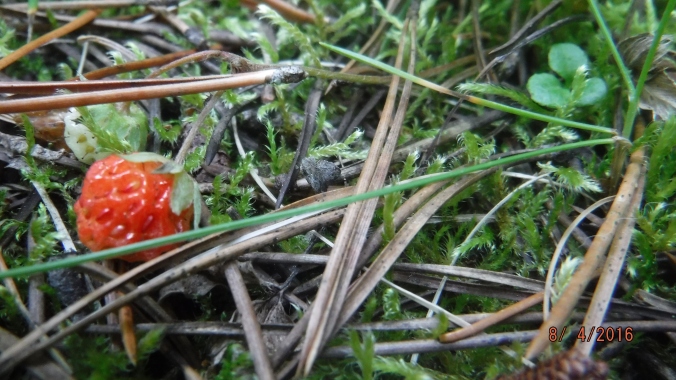 I caught a tiny bear, then decided to humiliate it by putting it on a leash.

Everything went absolutely according to plan for this camping trip. That’s kinda the problem. What happens when it starts to pour? What if the campsite is next to a slough and the mosquitos are out in full force? What happens if we get shitty neighbors that are playing shitty punk music until 5:00 in the morning?

It’s a gamble when it comes to camping. And I’m not a gambling man. Right now, the jury is still out on whether or not I’m a convert. I’m not sure if I’ll ever be a camper. In two weeks we’ll be spending a week outside, so I’ll have more to report when I’m back. Until then, if I had to pick between the outdoors and a nice hotel, I’ll take the king size bed with the air conditioned room. And hopefully, there’s a good bar close by.

p.s. To be fair, camping at Scotch Creek is hardly camping. They have hot showers and paved roads, so it’s not exactly roughing it.