After months of planning, saving, packing, and preparing, we’ve finally lumbered all of our belongings from one province to the next. A two day trip, 1300 or so kilometers, fifteen hours of driving, a three hour wait for the ferry, the number all added up to transplanting two people from Lethbridge, Alberta to Victoria, British Columbia. Since drawing up the schematics to move back in January, this is a trip that’s been in the making for a while.

Now we’re here, and after a week of unpacking, settling in, scouting out the neighborhood and taking a bit of a break, I’ve finally managed to set up the workhorse and crank out some words for the internet. As much as I love sitting by the beach in board shorts, it was time to plop down in front of the computer and write.

I had to spend a bunch of time posing majestically, staring in the harbour before I sat down.

See, I could recount the fact that since we’ve arrived, Kat has dived into the ocean and removed five crabs from their homes. I could also recount that I’ve given them new homes inside of our bodies, by boiling the crabs then soaking their meat in butter. Crabs that look sort of like this.

I know everyone is going to be looking at the crabs, but just so you know, that’s a medley of crooked-neck squash and spinach leaves in the bowl. I just want you to know that.

I could talk about how I finally live in a city again, and there’s a place not too far from home that sells Latin American food stuffs, or there’s a place that does nothing except charcuterie, or there’s a place that sells gentlemanly items like proper razor blades and humorous socks. But all these things take a back seat to the fact that once again I happen to be living in an actual city, even if it’s sort of a tiny city. Mr. Charlton thrives on space and people all over the place doing things in that space.

I might also talk about the idea that after well over a decade, I’ll have family around again. My brother lives in the city, and I have a mess of cousins and uncles and aunts that are dotted all over the West Coast. After fifteen years of being over in Alberta, I’ll actually be able to attend weddings and social gatherings without having to get on an airplane.

The most important thing to take away from this is that I no longer live in Lethbridge, Alberta. To extend that, I don’t even live in Alberta anymore. I now live in Victoria, BC, next to the ocean. I can pop my head out the window and see the ocean from here. I can hear the ocean waves pound the seawall. And I can drive half an hour out of the city to a craggy beach where my amazonian goddess of a girlfriend will literally dive in the ocean and catch live crabs with her bare hands. 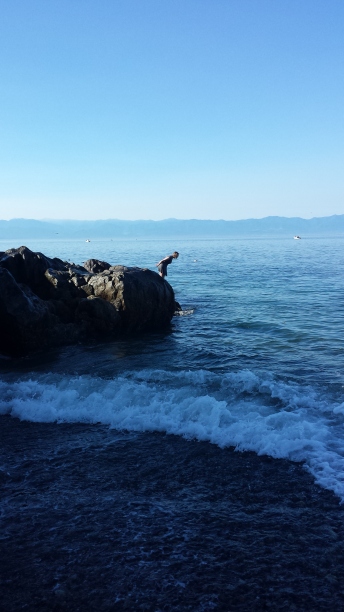 This picture was taken about 15 seconds before she spotted a crab and decided to leap in.

It’s going to be a year before I head back to school, so right now I’ll be saving some cash and catching up with family and friends who live in the area. So if you’re down on the coast, hit a guy up. I’m always willing to get a few beers and talk about small times. In the mean time, it’s incredibly nice to be home.

p.s. The crabs were utterly delicious. The mussels weren’t bad, but they weren’t good either. They’re out of season right now, and they tasted a little spawny.

In the same breath, they were the goddamned biggest mussels I’ve ever actually laid eyes on.

p.s.s. Sure, it’s just crabs right now, but soon I’m going to be hunting for fresh oysters. And mussels. And clams. Pretty much any shellfish you can think of, I’ll eat.

p.s.s.s. The drive down itself from Lethbridge was pretty mundane, except for the fact that the entire province of British Columbia seems to be burning to the ground.

It’s hazy in Victoria at the moment, because the smoke from the mainland is wafting over this way. Also, if it doesn’t rain in five days, this will be the driest summer that Victoria is ever had on record. This rain forest needs some rain!