My cousin, Richard Pruden, passed away in his sleep peacefully on May 18th, 2017. The people who knew Richard had this to say about the news.

“Richard Pruden? Died peacefully in his sleep? You must be mistaken. What you meant to say is Richard died trying to pull a double back flip on a dirt bike, while being set on fire, after a few tall ones. I’m certain his last words were ‘hold my beer’. That sounds more like Richard.”

About to go for a rip with his son Kori

Richard was a loud, boisterous, friendly, life of the party kind of guy. He wasn’t shy, wishy washy, or indirect. The few times I’ve met him he was usually handing me a beer, smiling a ridiculously large ear to ear grin, and telling me to lighten up. And even a sourpuss like me would have no choice but to lighten and smile right back. Richard oozed this positive energy that was infectious. It was impossible to have a bad time when he was around. 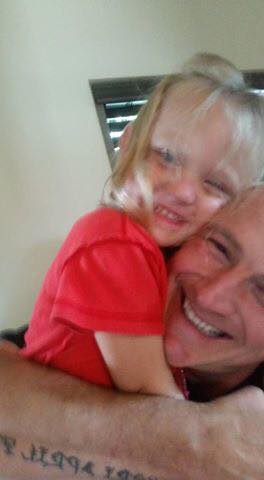 Richard and Kiyah (aka Chopper)

Unfortunately for me, the only reason I knew Richard at all is because of Facebook. Besides that, I could probably count the number of times I actually hung out with the man on my hands. Yet he was so generous and open about his life that even though we only saw each other at weddings, I still felt I got to know him a little bit. And that’s a whole lot better than not knowing him at all.

When I found out the news, I didn’t really know how to react. The only thing I could do at the time was try to live like Richard did, and I did so by eating four burritos in one sitting. Still didn’t feel right. So after two and a half weeks of sitting on it, I finally got the nerve to right about a guy I hardly knew, but will still greatly miss.

The only consolation I can provide is that maybe, just maybe, you only get so much actual ‘life’ on this crazy ride, and when you live as passionately and earnestly as Richard did, you’ll end up using it all up. It’s not fair and it still hurts, but that’s the only explanation I can come up with from losing someone as great as Richard Pruden.

He was only 41 years old, and he’s survived by wife (Joann), son (Kori), daughter (Kiyah), father (Richard Sr), mother (Linda) and step father (Rene). Richard also has two paternal half brothers (Mark and Mike), and a maternal half brother and sister (Derek and Ashley). My heart goes out to each and every one of them.

p.s. If you can use up life by having a good time, then I’m going to live forever.

p.s.s. Heaven is probably going to have to tap a few more kegs.