I’ll try anything twice. Even if that means I’ll be eating my own words. A while back, you might have read about me heading to a Calgary taqueria called Native Tongues. And the first time I went, neither myself or Kat was impressed. I have a rule, though. If something is terrible, you always have to go back and see if it’s actually terrible. A place might have an off day. A place might have kids running the show on the weekend.

My friend took me out there, and I explained the situation. Which quickly turned into “You had a bad time? Then let’s go somewhere else”. I shook my head in true Mr.  Charlton fashion. Which meant I was bobbing around like a Muppet under a Jim Henson’s hand.

“Ahhhhwwweee no no no no.  We’re going to Native tongues for a rematch. The last time I went, it was bad. But people keeps telling me it’s good. So I’m going to keep going until it tastes better or that I’m sure everyone else is an idiot”.

My gripe last time was pretty straight forward. Even though they were pretty tasty, they weren’t worth the hefty price of $4 a taco, especially considering these seemed to be a lot smaller than the standard 6″ taco you normally get served. When I mentioned this in my last post, I had a few gourmand friends of mine call me out. “They are worth the $4”, they insisted. I wanted to believe I was right, but maybe living in Lethbridge for a year and a bit had turned me into a cheap skate.

So to my pleasant surprise, they lowered the price. All the way down to $3.50. You might think to yourself “Jeez, man, that’s not really a huge set of savings there”. But that $0.50 meant something. First, it’s a reduction of 12.5%, which is actually quite a bit for a restaurant. Secondly, it also meant the tour of tacos (every single taco on the menu) was going to run me $21 instead of $24. Thirdly, and most importantly, it meant I was right. I was right to call out this taco and its price. I need it to be known that on the subject of tacos, Mr. Charlton knows what he’s talking about. 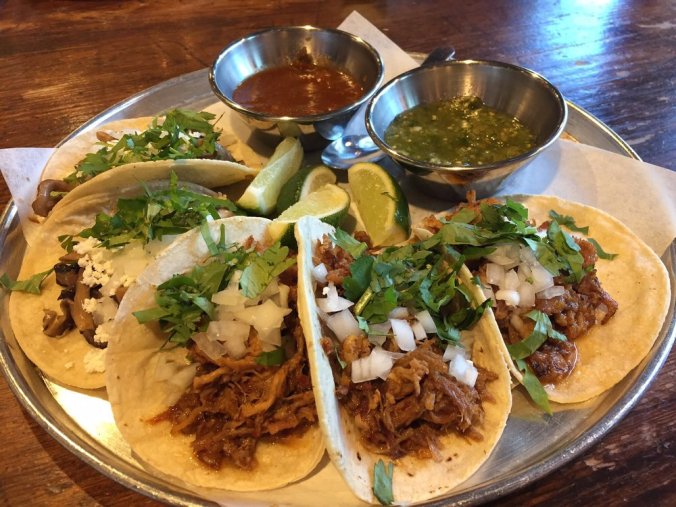 This picture was taken from Yelp. Also, I know what the hell I’m talking about when it comes to Tacos.

The menu changed slightly as well. The last time I went, they had a beef tongue taco. It’s since been removed. I think this is a good call, as beef tongue tacos are pretty bland, to be frank. I thought about going through every single taco, giving it my personal review, but looking back on it, there’s only word going through my mind when I think about these tacos.

From the handmade corn tortilla, to the salsas, to the queso on both the veggie tacos, everything about this screamed fresh. On a bite sized taco, this makes all the difference in the world.

So what did we learn? That it never hurts to give something a second go. I think that statement can be applied to other people as well. After two tries, then it might be safe to say something is not engaging you on some level. The other important lesson is that quite often I’m right. Especially when it comes to food.

p.s. I pretty sure the first time I went, they were just having an off day. I remember everything being pretty weak.

p.s.s. That’s not even close to the best meal I had when I was down in Calgary. Next up; 100 day aged steak.

p.s.s.s. It’s not even steak at this point anymore, people.