The body adjusts to stress. Winters feel a lot colder at the beginning of the season. By the time spring rolls around, you’ve adjusted to the drop in temperature. If you start to work out, it’ll be painful for the first three weeks, that is, until your body adjusts to the muscles tearing and regrowing. But the body takes time to adjust, and because of that, there is always growing pains when you encounter a new routine.

And right now, my body is definitely adjusting to the new environment. It’s been affecting me in weird ways.

Long story short, my body and brain are not used to the new, rigorous schedule I’ve set for myself, and as a result, are stressing out a bit. My mind, however, is fine. Mr. Charlton is holding it together pretty well, it’s just the vessel that holds me is struggling with waking up at 5:45 am and absorbing thirty hours of school a week and doing thirty hours of homework and then working twenty plus hours a week.

Still, though, even with this crazy schedule, I don’t feel overwhelmed yet. I’m still ahead in most of my classes, there’s a couple of knowledge gaps I have to fill with studying, but overall, I’m keeping my head above water. Even though I feel exhausted after these long days, I still wake up feeling refreshed and ready to do some more learning. At the same time, I’m hoping my body starts to adjust after week three or four. I’ve already had people at work comment on how tired I look all the time since my program started.

p.s. I’ve gotten insanely good at managing my time. On the bus? Studying. I’m at work? Some notes are put in front of me to glance at while I’m cooking. Walking home? Trying to recall the lessons from the day. When you don’t have any time to spare, study time is all the time.

p.s.s. Not only am I learning new things at school, I’m learning new things in the kitchen! Me and Kat decided that date night would be wing night, and instead of going out to some greasy pub, we tried making them at home. And let me tell you, they turned out amazing. Seriously, go buy some chicken wings, toss ’em in cornstarch, then an egg wash, then some seasoned flour, and throw them in a pot of hot oil for 8-10 mins. 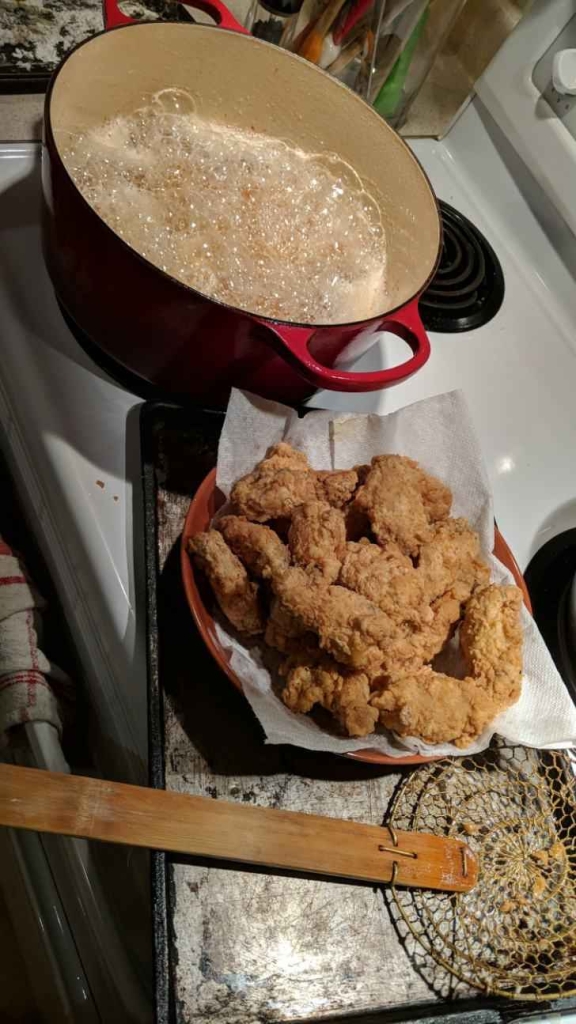 Look at these little badboys. We tossed ’em in some hot sauce and teriyaki.

p.s.s.s. You might also be wondering when I find the time to write this terrible blog. The exact time is typically Tuesday morning from 7:15 to 7:45, which is enough time to bang out a poorly written and edited piece of internet entertainment.

One thought on “Week 2 – Rough Around the Edges”